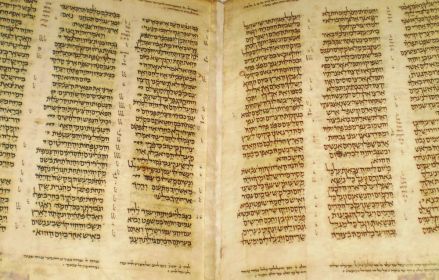 Within the beginning of chapter of Ruth, there seemingly exists a textual variant written within the margin just outside of Ruth 1:8. This written phenomenon occurs anywhere from 848 to 1566 times in the Hebrew Bible varying between traditions. The scribes from antiquity and modernity supplemented the words from the margin in the place of the similar word within the lines. This became known as Ketib/Qere. Ketib is the Hebrew word for “write” or “what is written” and Qere is the Hebrew word meaning “read” or “what is read.” Scribes then, when reading the text to their congregations, would supplement the qere from the margin in the place of ketib in the line.

Many speculations exist as to why this occurs in the texts and where its origins are found. This work assumes that these occurrences happened within the reading tradition of the text and not the written tradition. There are many theories as to what caused the origination of such scribal notes, such as corrections to Masoretic texts, textual variants from other sources, and other intermediary views such as providing a polite reading to the text. The scope of this essay delves into the best interpretation of Ruth 1:8 as indicated by the textual context for the intended audience and not with theories as to why these variants exists for the length’s sake.

Naomi, her husband, her sons, and her daughters-in-law are introduced in the beginning verses of the book as they are traveling through the fields of Moab. Noami’s sons take two Moabite women to be their wives and they pass away ten years later while staying in Moab. After the death of Naomi’s husband and sons, she tells her daughters-in-law to return to their mother’s house after she hears that the Lord had blessed the people in Moab with food during the famine they were experiencing in that time. In Ruth 1:8, Naomi tells each of her daughters-in-law to return to the mother’s house and says, “May the Lord make kindness with you (or “May the Lord deal kindly with you”) just as you made with the dead and with me.” The qere in the margin is יעש, as the Qal third feminine singular jussive meaning “May [the Lord] deal” and the ketib in the line is יעשה “[The Lord] will deal” as the Qal 3fs prefix conjugation. A similar occurrence is found in verse 9, יִתֵּ֤ן (“he will give”, or “he may give”) however, both the jussive and the prefix conjugation share the same form thus the verse can translate to English from either conjugation.

The following verse supplies the reader with a purpose statement. “The Lord will make… The Lord will give… so you will find (וּמְצֶ֣אןָ, Q2fp imperative) rest.” Verse 9’s imperative seems to offset the jussive readings of verses 8 and 9 from the context of the purpose statement.  Later in verse 20-21, Naomi claims the Lord dealt bitterly with her and acted against her. Naomi says that the Lord will deal kindly with them because the Lord has dealt bitterly towards her. The scribe during that time may have found it odd to have read the text as if Naomi was demanding from God to work in favor of the foreign women thus supplemented a calmer reading for the audience.  As a result, the audience will not witness the author’s intended irony of Naomi’s words in verse 8 as they are compared to verse 20, because scribes soften the meaning with the qere added in the margin. Thus, the qere as added within margin of verse 8 does not cope well with the context of the Naomi’s original words due to the added irony of her misfortunes.

Billy Doolittle is currently a student of Southeastern Baptist Theological Seminary and is a graduate and former Garrett Fellow at Boyce College. He is married to Brittany Doolittle and a member of Imago Dei Church in Raleigh, North Carolina. You can follow Billy Doolittle on twitter @BillyDoolittle