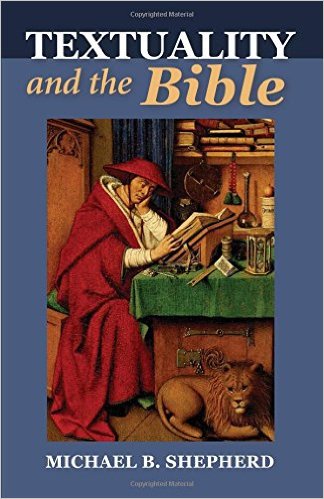 Dr. Michael Shepherd is Associate Professor of Biblical Studies at Cedarville University in Cedarville, Ohio. He earned his M.Div and PhD from Southeastern Baptist Theological Seminary under the guidance of Dr. John Sailhamer. He has published many works including The Text in the Middle, Daniel in the Context of the Hebrew Bible, The Textual World of the Bible, and others. He was awarded with 4 other professors for notable scholars by the Southeastern Evangelical Fellowship during the 67th annual ETS meeting in Atlanta. In Textuality and the Bible, he explores the validity of the Bible being a text in a unique combination of genre and faith producing history and theology while not strictly being confined to a historical or theological book. Rather the Bible is at its core a literary work. “It is thus necessary to describe it in textual, literary, and even linguistic terms” (xi). Shepherd will explore different arguments for defending how the Bible should be read in the manner it was a written: as a book, in order to properly train the church.

In chapter one, Shepherd’s explains the relevancy of the oral tradition of scripture in its textual context. His aim is not the delegitimize the oral tradition, but rather approach it in the manner it now exists: in a textual tradition. Simply put, reconstructions of an oral performance in an ancient context does not legitimize the written context in which we now have it. Reconstructing the historical oral setting of document using extra-biblical sources causes an undue strain in what the author is communicating. The oral traditions

are written in such a way that the author is correlating and exegeting the oral performance he is writing. This is done in order to fulfill teachings from the oral performance to future generations, in contrast to explaining what the prophet or priests were communicating in their ancient context. It is then through the composed text that oral traditions (as they exist within the written text) were intended to be communicated. Think of Jesus’ life and death. Does understanding an extra-biblical reconstruction of the person of Jesus and his death aid in understanding the purpose of his sacrifice or does the biblical account?

In chapter two, Shepherd argues that the authors wrote the Bible in self-awareness of other writings. As Shepherd states, “there is an implicit invitation to embrace composition and intertextuality as God’s chosen means of revelation.” This “invitation” is found in inner-biblical exegesis. He goes through each section of the Hebrew Bible: Pentateuch-Former Prophets (10-16), Latter Prophets (16-18), Writings (23), and ends with New Testament (24-25). This chapter was the most thrilling to read, as he shows examples within the text of how and why the Bible quotes itself and how different texts embody other texts to offer exegesis and awareness of others texts.

In chapter three, Shepherd discusses the canonicity of the books held together as a whole. Yes, the term canon was coined much later, however the “canon consciousness” each of these books have with another reveals an intentional design of each book to fit together at the moment these books were made and arranged. This was not a post-biblical decision. Shepherd then goes through each section of the Hebrew Bible as he does in chapter two while giving evidence of specific connections each section has to another (Deut 34:5 and Josh 1:9; Mal 4:4 and Ps 1) which he refers to as “seams.”

In chapter four, readers are introduced to the practice of interpretation using different tools to understand the Bible as a text. The chapter is entitled “Torah Lishma” (Torah for 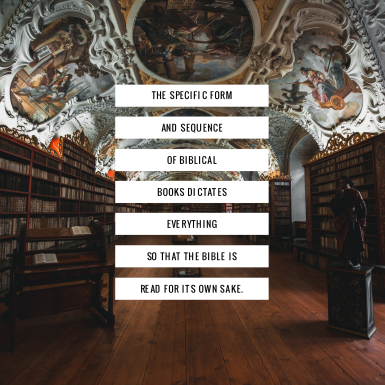 its own sake). This chapter was one of my favorites because it challenges the readers into rethinking the way in which the church is taught to read the Bible. Often studies in church consist of truth occurring around scripture but not scripture itself. Shepherd states on page 40, “Instead we favor courses in theology and “practical” ministry that simply talk around the Bible.” Shepherd encourages two types of study which aren’t commonly found in churches. One being literary analysis of the biblical narrative and the other being the “convergence of biblical language study, textual analysis, and compositional analysis.” The second study Shepherd undergoes is more focused on people wishing to teach at the local church. He then goes on to offer examples of how this second principle is practiced.

Chapter five teaches the reader how the reader uses different literary editions of the Hebrew Bible in their interpretations and teachings. Particularly, Shepherd uses the Syriac Version of Chronicles, known as the Peshitta which is valuable to textual criticism and the LXX version of 1 Sam 17-18 which agrees closer to 4QSamª than does the MT. In chapter six he presents a grammatical study of the object marker in biblical Hebrew. Based upon its position, it can aid in determining transitional texts, texts favoring Aramaic, and texts which were copied incorrectly based upon its pronunciation. Lastly, chapter seven offers a study of the Hebrew word “ahad.” Often times, words are given their definition by their root. As Shepherd stated in chapter one, “Words are denied on the basis of their usage within the language and on the basis of their relationship to other words within the same semantic field.” “Love” does not cover the full semantic range of the word (ahad). Shepherd then gives you the an example of a semantic study of (ahad) being used for the antonym for “reject” thus defining ahad as choose.

The truths taught in Textuality and the Bible should be sought by anyone considering teaching from the Old Testament or wishing to further their understanding of the biblical text. His teachings are seemingly against the grain of most OT sermons and OT studies I’ve come in contact with, however viewing the text in this manner opens a world of options that need some serious consideration. I would recommend this book to potential students and pastors wishing to further delve into understanding the word of God as the inspired and authentic in teaching and training. Scripture is given sufficiently to us in order for us to understand it in the context of its own writings.

If you wish to purchase Textuality and the Bible, you may do so here.

Billy Doolittle is a graduate and former Garrett Fellow at Boyce College. He is married to Brittany Doolittle and is a member of Highview Baptist Church in Louisville, KY.  You can follow Billy Doolittle on twitter @BillyDoolittle